The J.F.K. Library Presents the Donovan J. McCune Room
The McCune Room is OPEN on the 1st & 3rd Tuesday
from 2–4pm and every Saturday from 12-2pm. 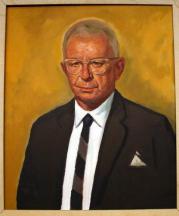 Donovan J. McCune was born in Ohio in 1902. He grew up there before attending Georgetown College (Washington, D.C.) and obtaining his medical degree in 1928 from Johns Hopkins Medical School (Baltimore, MD). After many years in medical teaching, Dr. McCune in 1951 decided to leave the east coast and move to California. He relocated to Vallejo, CA, where he began to work for Kaiser Permanente Hospital. Dr. McCune held the position of Chief of Pediatrics and Physician-in-Chief at the Vallejo Kaiser facility.

Dr. McCune had four passions in life: public speaking, the study of Latin, a love of books, and a compelling interest in how books were produced. These passions were reflected in the items that Dr. McCune collected. He collected books on California history, Latin, the printing arts (e.g., typography, printing, book design, and binding), and fine printing by notable private presses. He purchased an Albion Hand Press (manufactured in London in 1852) so that he could try his hand at fine printing. He also both gave and attended lectures on books and the printing process.

In 1961, Dr. McCune joined the Vallejo Library Advisory Board (“Library Board”), serving on it for two five year terms. In 1967, during his second term on the Board, he began to donate portions of his collection to the Vallejo Public Library. These donations continued throughout his second term and were graciously accepted by the City of Vallejo through its City Council. Dr. McCune helped design a special room in the newly proposed Main Library to house his collection. In 1969, this special collection room in the John F. Kennedy Library was named for Dr. McCune, and the library was officially opened in 1970. In 1971, Dr. McCune had a stroke which affected him until his death in 1976.

From his death until approximately 1982, the collection basically sat unused in the McCune Room. Then in 1982, the issue was raised on what to do with the Collection. Since Dr. McCune had left no money to maintain the collection, it was left up to the City of Vallejo to provide for the preservation of the collection.

A study was done by Dorothy Bevis (Professor Emeritus, University of Washington Graduate Library School) which reached the conclusion that the collection was of value to collectors but that it would be difficult to house, support and use such a collection at a public library. She suggested that the collection be sold and the money spent on additional library services. This study was used by Josephine Becker, Solano County Librarian, to recommend that the McCune Collection be declared surplus and sold. The proceedings of the sale were to be placed in a McCune Trust Fund for the purpose of purchasing library materials. In an April 5, 1982 memo to Library Board, Ms. Becker explained :”I do not, however, see any potential for future use of the McCune Book Collection or the Press within the present and future funding constraints and with the growing need for basic library services (as opposed to special services) for a growing population.”

In 1983, a Request For Proposal was sent out for an in depth study of the McCune Collection. Blair-Murrah Exhibitions won the contract to inventory, catalog and appraise the collection. The collection was appraised at approximately $300,000. In 1984, Gary Kurutz (Special Collections Librarian at California State Library) did a study at the request of the Library Board. His report indicated that a major portion of the collection was not appropriate for a medium-sized public library. He felt that many of the collections components were too specialized for the general public. Mr. Kurutz suggested that a major portion of the collection be sold while keeping a few items of local interest.

In 1985, it was determined to keep the majority of the collection and sell a small portion at auction. The funds raised would be placed in a special endowment fund so that the interest from such a fund could be used to preserve, maintain, and enhance the collection. On October 17, 1986, an auction at Butterfield & Butterfield of San Francisco sold 350 items from the McCune Collection. The auction produced a gross sale of approximately $80,000 and netted approximately $65,000 after a 15% commission and expenses.

In 1987, the McCune Collection Endowment Fund Advisory Committee (“McCune Committee”) was formed. Its purpose was to: (1) review and make recommendations concerning expenditures, (2) solicit contributions, (3) make recommendations concerning display, use and maintenance of the collection, (4) explore the possibilities of forming a local printing club to use the Albion Press, and (5) make annual reports. Since its formation, the McCune Committee has sponsored a series of talks on the Art of the Book. These free presentations have occurred yearly, typically in the Spring and the Fall. The Committee has enhanced the collection by adding new material to the McCune as well as by protecting the items already in the collection. A current project of the McCune Committee is to make the books easier to locate by both title and author by the use of a computer indexing system located in the McCune Room.