The J.F.K. Library Presents the Donovan J. McCune Room
The McCune Room is OPEN on the 1st & 3rd Tuesday
from 2–4pm and every Saturday from 12-2pm.

Artists interested in exhibiting for the 2nd Friday Art Walk should contact us via (707) 674-4082 or mccunecollection@mail.com
Home > News > McCune Collection Committee - Year End Report for 2016
Back to Top 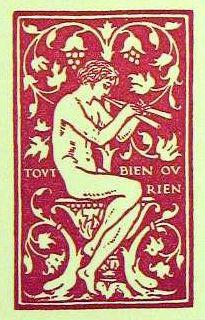 The Origins of the McCune Collection

The McCune Collection of Rare Books & Art is the legacy of longtime Vallejo resident and physician, Dr. Donovan McCune, who was born and raised in Ohio.  After graduating from Georgetown University, he obtained his medical degree from Johns Hopkins.  Dr. McCune’s professional career spanned numerous positions as a pediatrician in New York, New Jersey, Ohio and Connecticut.  In 1951, he moved to California to work for Kaiser Permanente Hospital in Vallejo, where he served as Chief of Pediatrics and also staff assistant to the Executive Director of the Kaiser Permanente Group.

Dr. McCune had four passions in life: public speaking, the study of Latin, a love of books, and a compelling interest in how books were produced. These passions are reflected in the items that Dr. McCune collected. He collected books on California history, Latin, the printing arts (e.g. typography, printing, book design, and binding) and fine printing by notable private presses. He purchased an Albion Hand Press (manufactured in London in 1852) so that he could try his hand at fine printing. Additionally, he both gave and attended lectures on book making and the printing process.

Dr. McCune was appointed to the Vallejo Library Advisory Board (VLAB) in 1961, serving on it for two five-year terms. In 1967, during his second term on the Board, he began to donate portions of his collection to the City of Vallejo. These donations continued throughout his second term and were graciously accepted by Vallejo through its City Council.  In 1969 a room expressly designed to house the collection in the John F. Kennedy Library was named for Dr. Donovan J. McCune.  Several months aft er the library officially opened in 1970, Dr. McCune had a stroke which affected him until his death in 1976.

In 1987 the City of Vallejo amended its municipal code in order to form the McCune Endowment Committee as a subcommittee of the Vallejo Library Advisory Board (VLAB). In 2016 the Vallejo City Council abolished VLAB and concurrently elevated the former McCune Committee to the status of a full City commission called the McCune Collection Commission. Its 7 Council-appointed commissioners are charged with maintaining, protecting, and enhancing the collection as well as making it available to the public.

Mission of the McCune Endowment Committee

Aims & Activities of the McCune Committee

The McCune Committee provides public service in the Arts of the Book. We seek to:

Report from the McCune Committee Chair

The McCune Collection was bolstered by two seminal events in 2016, the impacts of which will continue to shape the Collection’s future and its prospects for many years to come. Back in 1987 the Vallejo municipal code was revised to form the McCune Endowment Committee to oversee the Collection. That code revision also stipulated that it be a subcommittee of the Vallejo Library Advisory Board (VLAB). After a 2016 re-evaluation by the Vallejo City Council of all City boards and commissions, the Council decided to eliminate VLAB in favor of selecting a representative to the Solano County Library Council. Concurrently with that decision, the Council also replaced the former McCune Committee with a new full City commission called the McCune Collection Commission. This elevation in status provides a fresh framework for the newly appointed McCune Commissioners to more directly interact with the City administration and thus benefit the Collection with greater visibility and increased resources.

The second momentous event of 2016 involved a restructuring of the McCune Endowment Fund which originated from the auction proceeds on a portion of Dr. McCune’s original bequest. The 1987 municipal code revision which created the Fund stipulates that the interest generated may only be used to perpetuate the Collection. Unfortunately some years back the threshold for the principal portion of the Fund was arbitrarily reset after the finance department had problems identifying original records tracking the Fund. Subsequent to the sharp market declines of the late 2000’s, diminished interest earnings brought this matter to the forefront, as the Collection could not be further supported by the Fund without re-establishing the original principal amount. After a several month research effort and the pro bono assistance of Mariam Whitten from Bonhams, successor to the auctionhouse of Butterfield & Butterfield, the newly re-computed principal yielded over $37,000 from previously restricted funds. By itself this boost does not create a sustainable path for the Collection’s finances; however, it does afford the Commission some much needed additional time to reinvigorate supporter donations through a new McCune Patronage Program.

The McCune Commission continues to expand activities and programs offered at The McCune. Most significantly a new program has been launched to identify and train qualified volunteers who wish to support the Collection with their personal time and effort. The McCune Volunteer Coordinator, Thia Markson, has spearheaded the program by participating in a volunteer recruiting event at CSU Maritime Academy and by listing McCune opportunities on the www.volunteermatch.org website. Thus far The McCune has been fortunate to add two local residents to its volunteer ranks: Adam Kirshenbaum and Linda Lux. They are assisting with events and collection maintenance. The program’s goals are to attract at least three more volunteers to help in areas such as social media, database maintenance and donor relations. Another new effort launched is the expansion of regular visitor hours at The McCune by including noon – 2pm on 1st and 3rd Saturdays. Vallejo’s booming weekly farmers market provided the impetus for these new hours which, with some additional volunteers, could be further expanded to include every Saturday.

Beyond this increase in McCune activities and programs, the Commission is pleased to point out some capital improvements including an updated certificate of occupancy, new emergency exit signs and the replacement of a large number of fluorescent bulbs in the foyer. The McCune is also fortunate to have acquired a new wet/dry vacuum, a computer monitor, two digital cameras, an artificial Christmas tree, and various program supplies. Several enhancements have been made to the McCune Collection website as well. Most notably several short videos are now available for view on topics such as the Gutenberg Leaf, Byrne’s Euclid and the Odyssey of Homer. In addition there are new sections devoted to the 2015 Holiday Tea event plus the McCune Volunteer Program.

The McCune Collection attracted over 1090 visitors in 2016 (compared to 1036 in 2015). This reflects the continued popularity of the Spring and Fall Program Series, the McCune serving as a regular venue in Vallejo’s 2nd Friday Art Walk, and participating for the first time in Vallejo Open Studios and Visions of the Wild. The McCune Room also continues to be a meeting location for local groups such as: the Friends of the Vallejo Public Library, Sister Cities, Vallejo Art Alliance, Vallejo General Plan Working Group, and Capitol Street Mosaic Committee. The McCune has seen a notable increase in requests for private tours as well.

Finally, during 2016 the Collection was augmented by the donation of more than 40 books, photos and art prints. The Commission is continuing an ongoing comprehensive effort to standardize its policies and procedures including drafting and/or revising such documents as: the McCune Volunteer Program Policy; the McCune Room Event and Use Policy; the McCune Collection Image Use Policy; and the McCune Security Services Policy. The McCune Collection brochure was also revised and updated thanks in particular to the work of Linda Lawless, Ken Innes and Julie Stratton. The McCune Collection is most fortunate to be overseen and operated by a many talented Commission supported by equally talented volunteers, all of whom devoted over 2200 hours of their time in 2016 (compared to 1700 hours in 2015). By attracting diverse volunteers as well as increasing the range and support of donors, the McCune Collection remains one of Vallejo’s cultural icons enhancing the quality of life for all Vallejoans and residents in surrounding communities.

Ongoing Activities Hosted by The McCune

Other Events at The McCune

Private Tours of The McCune

The McCune website, www.mccunecollection.org, now includes several videos. Some of the titles include: A Noble Fragment, Byrne's Euclid 1847, and The Odyssey of Homer Books 1 & 2. There are also new sections about volunteering at the McCune, the McCune 2015 Holiday Tea event and the McCune Collection 2015 Annual Report.

The following items of the McCune Collection were highlighted on the website in 2016:

The McCune Endowment Fund was created in 1986 by the City of Vallejo through auctioning some of the Collection’s assets.  Under CA State law and Vallejo’s Municipal Code, this fund is managed by the Finance Director of the City of Vallejo.  A portion of the interest generated by the fund is allocated each year to the McCune Committee’s operating budget.

Since the Endowment Fund is a major source of support for the operation of the Collection, the goal has been to ensure that the Endowment Fund retains a net balance sufficient to maintain an inflation-adjusted value which either remains steady or grows a bit. That way, future interest income will at least not be further eroded by the rate of inflation.