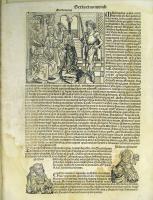 Hartman Schedel (1440-1514) was a humanist scholar who studied in Leizig, receiving his Magister Artium in 1459. He then moved to Padua to study medicine and received his medical degree in 1466. Returning to Nuremberg, he was contracted to write a history of the world to match the illustrations prepared by Micahael Wolgemut and Wilhelm Pleydenwurff.

The Nuremberg Chronicle follows the history of the world from creation until its publication in 1493. It is divided into seven sections or ages: 1) creation to the great flood, 2) up to birth of Abraham, 3) up to King David, 4) up to the Babylonian captivity, 5) up to birth of Christ, 6) up to 1493, and finally, 7) prediction on the end of the world to the Last Judgment. It is lavishly illustrated with 1809 illustrations based on the use of 645 woodblocks.

These original leaves are found in The Nuremberg Chronicle. With a leaf from the first Latin edition. Printed in San Francisco in 1930 by John Henry Nash for The Book Club of California.

Folio CLI – recto: headline is “Sexta Etas Mundi.” Woodcut illustration with heading of “Machometus” is at the top of the page. This woodcut shows Mohammed sitting with a book, one man to his side and another kneeling in front while an Arab bodyguard stands nearby with two swords, one outstretched. At the bottom of the page are two smaller woodcut illustrations showing S. Hoar and Isidorus Episcopus. There are also two-line initials on the page.

Folio CLI - verso: woodcut portrait of Eraclius on top right and in the bottom left are four woodcut illustrations: comet, rainbow, child with four arms and four legs, and child with two heads. Two-line initials on the page.

Folio CXLI – recto: headline is “Sexta Etas Mundi.” Four Byzantine emperors on the right side: Philippicus, Anastatius, Theodosius Tercius and Leo Tercius. Two-line initials on the page along with capital marks in red.

Anton Koberger (ca 1440-1513) was a goldsmith in Nuremberg. He was the godfather of Albrecht Durer. Koberger turned to printing in 1470 and soon established the largest printing house in Europe, employing over 100 workers and 24 printing presses. In addition, he often contracted with other printers, including Adolf Rusch of Strassbourg and Jacob Sacon of Lyon, to do additional printing work. Koberger printed over 200 titles of incunabula, including 15 different copies of the Latin Bible. His most famous work was the illustrated Nuremberg Chronicles which he published in 1493 in both German and Latin editions. It is believed he printed over 1000 copies of each at a time when most printers issued editions of only 300 copies. It is said that his only business blunder was when he turned down Martin Luther’s request to become Luther’s publisher.

Michael Wolgemut (ca 1434-1519) was a noted painter, wood carver, and woodblock engraver in Nuremberg. He had a large workshop with many apprentices, among which was Albrecht Durer. Wolgemut’s woodblock engravings were highlighted in the Nuremberg Chronicles. He also received the commissions to paint the altar pieces of the churches of Zwickau and Schwabach.

Willhelm Pleydenwurff (ca 1460-1494) was a painter and woodblock engraver. He was the stepson of Michael Wolgemut, with whom he corroborated on the Nuremberg Chronicles.