Dr. Snyder returns to the McCune, speaking on the history of Naval medical facilities and services on Mare Island. Illustrated with original photos and enhanced by official Naval correspondence, Dr. Snyder’s talk will highlight the long and storied history of Mare Island’s hospitals as well as his own dedication to preserving their rich legacy.

In 1937, Nazi officials purged German museums of works the Party considered to be degenerate. From the thousands of works removed, 650 were chosen for a special exhibit of Entartete Kunst. The exhibit opened in Munich and then traveled to eleven other cities in Germany and Austria. In each installation, the works were poorly hung and surrounded by graffiti and hand written labels mocking the artists and their creations. Many of these artists, including Marc Chagall, Max Ernst, Emile Nolde, Otto Dix and Paul Klee are now considered masters of the twentieth century. In this insightful talk Dr. Zil discusses "Degenerate Art" and the eventual fate of the artists and their works. 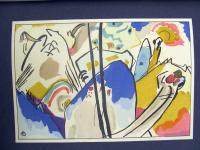 Join us for a delightful afternoon at the McCune as Chair Judith Hilburg conducts tours of the vault and docents help visitors enjoy an opportunity to explore the unique and rare holdings of this extraordinary collection. Light refreshments will be offered.